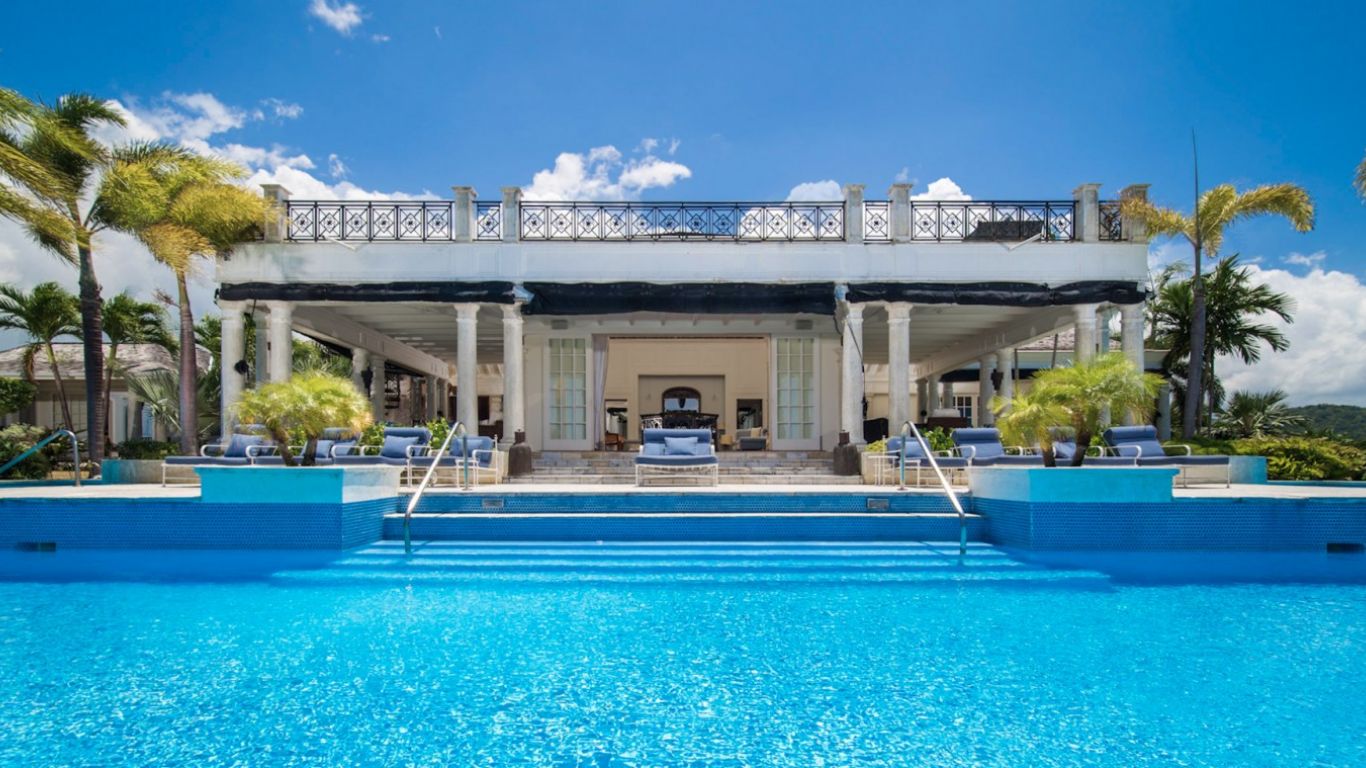 Villa Arina commands a strategic position on Barnes Hill with views that take in sixty miles of varying vistas including the ocean. The house is built on one level and the Great House influence is punctuated with accents of Rome through the graceful columns and shaded courtyards and here and there, subtle hints of a Moroccan palace.

There is a seamless flow to this house that enables the breeze to constantly waft through; lofty rooms with casket ceilings enhance the sense of space; calming shades of blue, coral and splashes of red create a restful and timeless ambiance and there is the distinct awareness of the outside being brought in from wherever you look. There are seven bedrooms to choose from that are contained in three suites and approached along a columned covered walkway that leads off from the central courtyard. This clever and inspired design facilitates complete privacy enabling families or friends to adjourn to their own space.

The veranda is the centerpiece to the living space at Villa Arina, offering space to sit, a table at which to dine, a bar to sit at and a pool deck for sunning. The seven multi-tiered pools are centered by a sixty-foot infinity-edge lap pool, with a kiddie wading pool and whirlpools either side.

From our signature services to the finest amenities and custom-created itineraries, your happiness is our one and only priority.

Butler Service
Pamper yourself with personal butler service to tend to every need.

Maid Service
Our team will ensure your home is always spotless using only organic products.

Ambassador
Our Ambassador will ensure everything is to your specifications.

Transfers
Complimentary chauffeur services from and to your home.

Concierge
Our global concierge team will create a personalized itinerary.

Pre-stocking
We will pre-stock your home with the exact products you choose.

Welcome Ceremony
We will greet you with champagne and exquisite hors d'oeuvres.

Unpacking
Your butler will unpack all your bags and put your clothes in the wardrobe.

Yachts
Experience the thrill of sailing with our bespoke yacht charter offerings.

Private Jets
Fly conveniently and luxuriously to your next destination by hopping aboard our private jet charters.

Exotic Cars
Large selections of self-driven car rental services, as well as chauffeur-driven transfer and transportation services, may be arranged by our dedicated team.

Helicopters
Take flight aboard our fleet of helicopters to suit your travel needs.

Chef Service
LVH liaisons with some of the best chefs worldwide and can recommend you the very best. Enjoy elite dining experiences with customized menus created by specially appointed cuisine specialists from the four corners of the world.

Staffing
Security guards, bartenders, servers and chambermaids, amongst other professionals from multiple disciplines, are on call just in case you need additional services during your stay.

Entertainment
We can assist you and recommend the most exclusive events, restaurants, clubs, shows, and theaters.

Experiences
Let us create unforgettable experiences including unique attractions, insider access and once in a life time activities.

Spa and Aesthetics
A wide range of services is available, including, but not limited to, massage services, facial care, hairdressing services and nail treatments.

Wellness
Energize and tone your body or relax and calm your mind right in the comforts of your villa. LVH's certified yoga, Pilates, and gym instructors are on site and ready for private sessions.

Chauffeur
Sumptuous chauffeur services are available upon request. Transfer and transportation are provided by only the most prestigious luxury vehicles and professionally trained chauffeurs.

Laundry
Attend to all your personal laundry needs

Exclusive Concierge Membership WIth Your Booking

Exclusive Concierge Membership WIth Your Booking

Receive one complimentary concierge membership (valued at USD 15,000) good for one year.

LVH Prive is our exclusive lifestyle community of elite homeowners, travelers and tastemakers. Receive access to the most exclusive ultimate travel experience you won't find anywhere, with unrestricted access to:
Our private collection via the mobile application
A dedicated concierge team who will handle all of your inquiries
Dedicated loyalty and referrals program
Exclusive packages and experiences
Last-minute special promotions with up to 50% discount
Access to sponsorship events and activation experiences
Join Now
Close